NO TO LITHIUM, YES TO WATER AND LIFE IN OUR TERRITORIES! 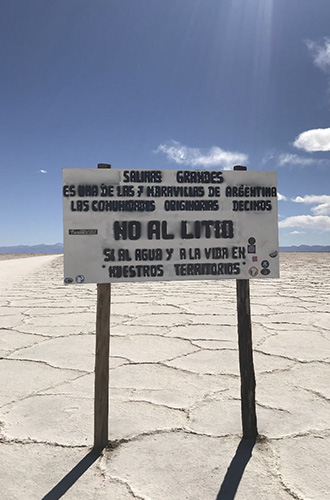 Aerocene began in a salt flat.

When Argentina-born Aerocene co-founder Tomás Saraceno was visiting the Salar de Uyuni in Bolivia, one of the world’s largest salt flats, he was struck by the reflection of the sky in the expanse around him. It gave the impression of the horizon disappearing, of floating among clouds and stars—no above nor below, only an immersion in the great relationship between terrestrial and aerial.

The sad reality that emerges from this impression, however, is that the disastrous effects of human industry on the earth inherently extend upward—and vice versa. Aerocene imagines a future era in which we learn together to float and live in the air, but also in which we recognize that we cannot do so without reaching an ethical commitment to the atmosphere and planet Earth.

As the Aerocene manifesto reads:

A different epoch is needed, one which radically upturns fossil narratives of materiality, and re-examines the inscribed notions of property and properties, human and inhuman, of production and subjection. How would breathing feel in a post fossil fuel era? How can we challenge the dominance of dispossessing geopolitical forces, and overcome the extractive approach to Earth and the wealth of life it provides for?

Salt flats like Salar de Uyuni and Salinas Grandes are under siege by these very geopolitical forces and extractive approaches—as are the Indigenous communities that call them home. Salinas Grandes is managed by 4 communities in total: in the northern sector are the communities of Tres Pozos, Pozo Colorado and San Miguel del Colorado, and In the southern sector, the community of Inti Killa de Tres Morros. Together, they represent a total of 33 communities. Yet, nestled under the salt flats’ reflective, expansive surfaces is also the lion’s share of the world’s lithium, nicknamed “white gold” for its demand in the technology industry. Lithium is used to make the batteries that power our cellphones, our tablets, our laptops, our electric cars, and more. Lithium-ion batteries are being heralded as a way out of fossil fuel dependency, moving us toward electric freedom. But that “freedom” comes at a great cost, and as is the case with almost all prices in the Capitalocene, it is paid by those who benefit the least.

Argentina, Bolivia, and Chile make up what is known as the “lithium triangle,” with 80% of the world’s lithium brine reserves. However, of the three, Argentina is the only one where companies are granted permission by government concessions to mine it. And as such, the toll on the country grows. Argentina’s Ministry of Mining reports that investment in lithium extraction grew by 928% between 2015 and 2018. This number will only continue to grow, as the demand for lithium increases, especially as foreign governments continue to exert pressure on a move toward “greener” technologies.

While steps like moving to electric cars are important, they are short-term and cosmetic at best if they fail to address the extractive ideologies underpinning climate change and the Capitalocene—if an environmental solution depends upon the extraction of materials and labor at the expense of Indigenous communities, then it is not a solution at all, but merely a temporary fix for the few, prolonging the amount of time before the point of no return is hit, rather than changing the course of our path.

Argentina’s Ministry of Mining reports that investment in lithium extraction grew by 928% between 2015 and 2018.

This is evident in the loss of local access to clean drinking water, in addition to the violation of land rights and belief systems of the indigenous communities, which contradicts extraction practices. Lithium mining uses a process that burns off water until only the mineral is left—one tonne of lithium usually requires as much as 2 million litres of water. A standard electric car uses roughly 20 kilograms of lithium; this translates to 40,000 litres of water. A Tesla using an 850 kWh lithium-ion battery uses about 51 kilograms of lithium, or 110,000 litres of water, taken directly from Indigenous peoples already experiencing droughts and water shortages. In 2016, residents in Huancar, Jujuy, lost water supply for 50 days, and some communities currently have to have potable water bussed in.

There are companies that assert that lithium mining is actually good for aboriginal communities, as they bring in jobs that hire locally and even pay communities for the right to mine. But the disparity between profits for already wealthy companies and the pittance given back to the Indigenous peoples of the salt flats is heinous. For example, though one company, Exar, will extract around $250 million of lithium annually, they will pay less than $200,000 to the six Indigenous communities who own the land they will be mining—not $200,000 each, but shared between the six communities. That’s less than 1/100 of 1 percent.

Jujuy is one of three Argentine provinces to mine lithium, along with Catamarca and Salta. In total, there are approximately 46 active lithium extraction projects in the country. Together with Chile and Bolivia, Argentina hosts 80% of planetary lithium brine reserves.

The Aerocene Pacha free flight at Salinas Grande represents this future. Buoyed by nothing but the power of the sun and air, Aerocene’s aerosolar sculptures reveal a way to float in the air without negative impact on the earth, the air—or the water.

This free flight comes shortly after the 50th anniversary of the Apollo 11 moon landing. In 1961, eight years before the fateful flight, US President John F. Kennedy stood before Congress and pledged that, before the end of the decade, he would “land a man on the moon and return him safely to the earth.” This flight has different aspirations—to float a woman into the atmosphere and bring her back down without carbon or toxic pollution, without exploiting local communities. The visual similarity between the lunar surface and the Salinas Grande salt flat is striking. Our landing here will be one short flight for a woman, one giant journey into the possible futures of humanity.

Apollo 11 was launched into space with a computer that had roughly 4 kilobytes of RAM memory and 72 kilobytes of ROM memory. In comparison, most modern smartphones have between 4 and 12 gigabytes of RAM and 512 gigabytes to 1 terabyte of ROM, meaning that the phone you carry with you in your pocket has 1 to 3 million times more RAM and 7 to 14 million times more ROM than the computer that took us to the moon. This transformation is awe-inspiring, but the batteries that power these phones also contain lithium, reminding us that there has been almost no progress in the 20th century without human collateral. Let us do our best to ensure that further progress in the 21st century does not.

Looking toward the future of a clean atmosphere will always inevitably bring us back down to earth. As Bruno Latour says in his 2018 book Down to Earth: Politics in the New Climatic Regime, “Each of us thus faces the following question: Do we continue to nourish dreams of escaping, or do we start seeking a territory that we and our children can inhabit? Either we deny the existence of the problem, or else we look for a place to land.” As our pilot lands in Salinas Grandes, we hope she can land in a place that promises futures free from extractive and exploitative principles, free from state and capitalist control, free from from fossil fuels and borders.

Lithium extraction in Argentina: a case study on the social and environmental impacts