Story and impressions of the work process

At a time when our society is hurt and divided, the mottos: Work free from social and human borders and take advantage of the energy generated by community work, were good guides for the incubation of Museo Aero Solar “Reconquista”.

With these objectives in mind, a group of puppeteers and visual artists gathered in the academic space “Inflatable Laboratory”, decided to invite social groups that for some reason were exposed to different situations of social vulnerability to join the project.

We chose to express ourselves from what is usually considered as waste, from what is despised, from what does not manifest at first sight the possibility of becoming an artistic object.

Perhaps those who contributed most to making the construction of this great sculpture possible were precisely the people and groups in the most vulnerable situations.

Most of the bags that make up the Museo were rescued from the waste that arrives from Buenos Aires to the Bella Flor urban recycling cooperative, which is located in the town of José León Suárez, Buenos Aires. This highly contaminated and vulnerable region is called “Reconquista River Zone”, hence the name of our Museo.

In the same area of Reconquista River, very close to the facilities of Bella Flor Cooperative, is the North Penitentiary Complex, where the San Martín University Centre (CUSAM) is located. The CUSAM is a university centre dependent on UNSAM, where prisoners and prison guards can study together in an unprecedented experience. Women and men.

We set out to build an Aero Solar Museo from the slogans generously shared by Tomás Saraceno and his team on Aerocene’s website. We set the objective of making the big sculpture by previously building a 300 square meter sheet, equivalent to a 10 x 30 meter rectangle, with bags or material that had already had some kind of previous use.

More than half of the material that makes up the Museo Reconquista was rescued from the mountains of rubbish that circulates daily in the facilities of the Bella Flor urban recycling cooperative. We also appealed to friends and family who would like to donate bags. We detected in our community that in general young people and teenagers do not usually keep plastic bags in their homes, it was easier to receive them thanks to the contribution of older people.

It is important to highlight that the workers of the Bella Flor Cooperative dedicated a lot of time, effort and joy in the recovery of bags for this purpose and they selected them thinking about the colours and formats that were most attractive to them for the construction of the Museo. After that enormous work they also spent several days cleaning and gluing bags.

Two special mentions are due to the plant coordinator Nora Rodríguez, who proposed the name “Reconquista” and considered that one of the activities to be carried out by the work cooperative was artistic production, because both she and her team had a lot to express from that place. The other special mention goes to Ernesto “Lalo” Paret, a great territorial articulator who understands and promotes expression through art in the processes of social reconstruction.

At this point it is important to mention the other driving idea of the project: The small, the oppressed, the individually and socially depressed can be transformed and generate a sense of expansion when they manage to take AIR in a communitarian way. We like the metaphor of the flattened Museo when it is placed on the floor before being set up, in relation to the air-filled, expanded, vital and moving Museo.

In order to make the 300 square metre sheet more concrete, we proposed to build, with each group that participated, sheets of approximately 50 square metres. Each day of work lasted approximately three hours and ended with a game of raising the newly constructed sheet of paper between all of us, bagging air and, when we came down, building a “bubble” where we all stayed inside and there… we sang, said poetry to each other, laughed and played freely.

Both the finished Museo and these previous instances of play are spaces of ephemeral habitability, meeting atmospheres, spheres of air.

Another slogan that crossed the construction process was that the participants had the possibility of writing, drawing and intervening in the sheets as they wished, expressing what they wanted, in absolute freedom, without any slogans and without any limits. This experience had its most impressive point in the CUSAM where the students deprived of their ambulatory freedom used the possibility of expressing themselves by writing on the plastic with extreme dedication, care and depth.

As the sheets were being built and reached our work base on the UNSAM Campus, the team of puppeteers and visual artists from the Inflatable Laboratory chair brought them together, trying to build a logic in the combination of colours, textures and written interventions.

The whole assembly process was guided by two models, one folded with the final shape of the tetrahedron and the other with the open rectangle and the possibility of observing it from both sides, which guided us to the position where each sheet could be placed.

These objects were very useful to explain to the people who joined the project what the final shape of the object we were building was going to be and it was also useful for the folding and final assembly stage.

The first assembly of the Museo was carried out inside a large circus tent that the University has on its Campus. We enjoyed living in and observing this wonderful and enormous object. That day, a cultural anthropology class was held inside the Museo and then we made the object independent from the air entry point so that the puppeteers could manipulate it from inside by means of some threads tied to the internal vertices and generate movements through the space. The object took on a life of its own… It was an incredible experience. That moment was very well recorded by Joaquín from Aerocene Argentina.

The first public and open-air installation was carried out in an open space on the Campus as part of the First International Congress of Art and Science “The Skies” organised by UNSAM. The following stagings took place on a rugby field located inside the prison complex, in a shed where the Museo was converted into a classroom for a philosophy class, and in other sectors of the Campus where it was set up for repairs. 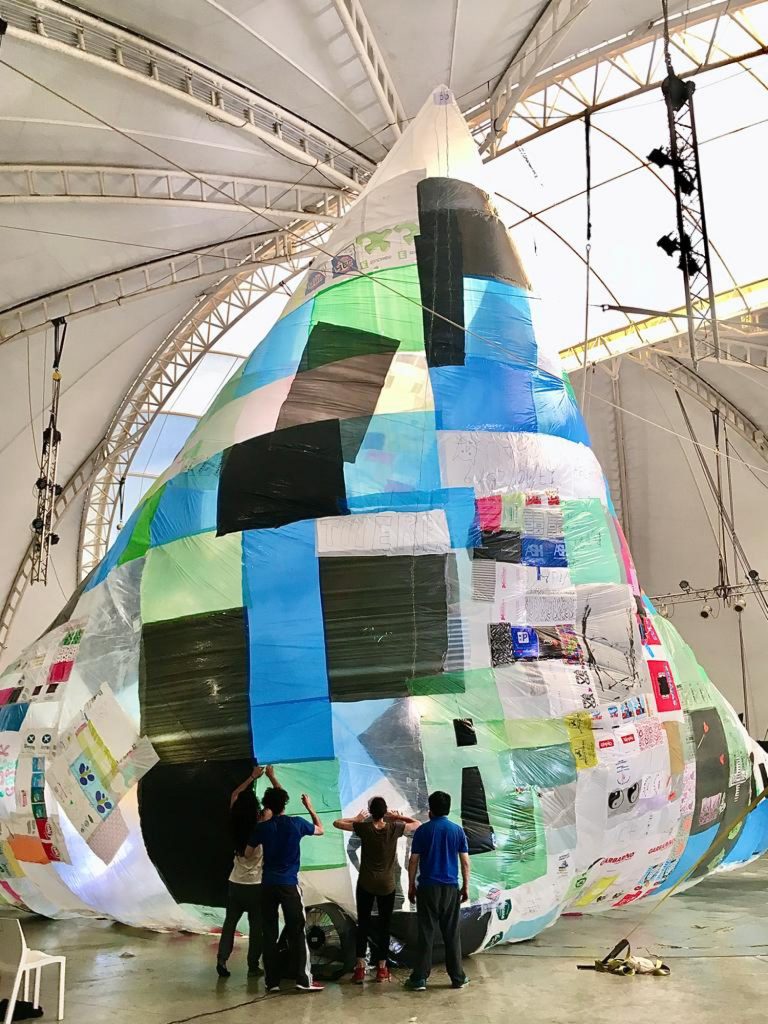 The Museo Aero Solar Reconquista is a collectively owned object that will continue to receive the written interventions that the people who observe it or live in it wish to make and will remain available to the whole community to be mounted wherever a team of people has the desire to do so.

We know that a moment will come when the fragile material that makes up the object and requires permanent repairs will have already completed its life cycle. At that moment we will make a final survey of everything written and drawn on it and surely in some singular ceremony it will be given back to the Bella Flor Cooperative to enter a recycling process. It sounds sad… but we know that this material, added to the work of so many people, has allowed us to recycle and expand our emotions and our minds.

We thank Tomás Saraceno, Joaquín Ezcurra, Maxi Laina, Dalia Maini, Sasha Engelmann and all the aeronauts who through this open source initiative have inspired us and allowed us to go through some moments of our lives with a little less “gravity”.