Aerocene Munich 2019
An incomplete report to be filled by imagination.
by Dalia Maini 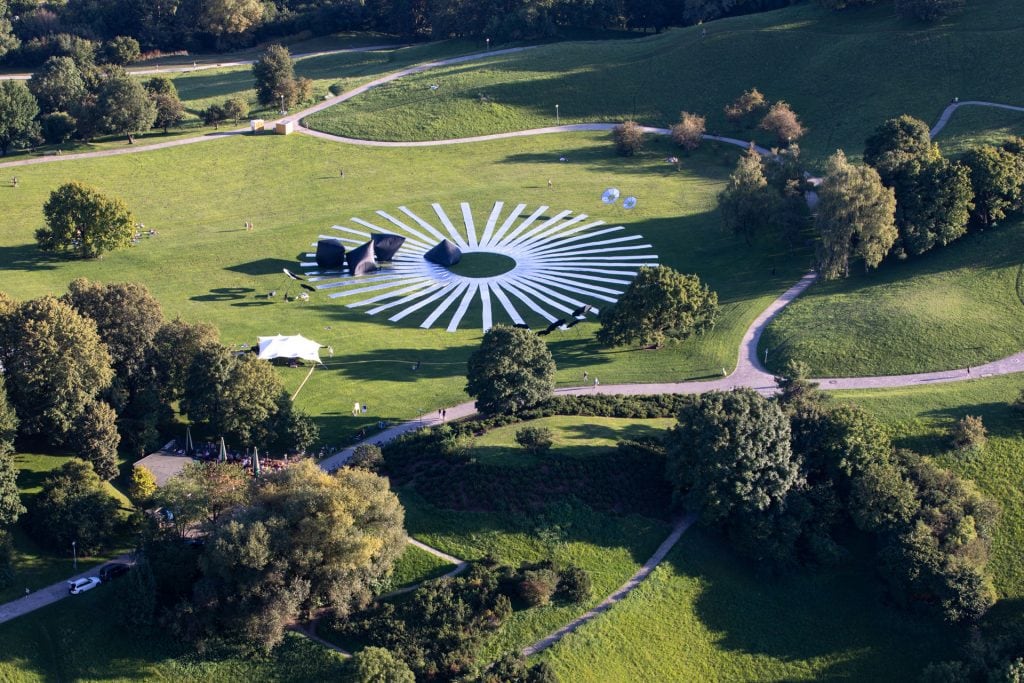 I have been invited to take part to the six days of Aereocene Festival (6-11 September 2019) in Munich, where the core of Aerocene Community, old and new members, people from all backgrounds, curious or casual, gathered together to collectively debate about what Aerocene is, which are the issues that it addresses and how it needs to be performed to become reality.

Since all imaginaries need to be acted upon to turn them into visions of sociality, and thereby community, I flew from Berlin to the South of Germany careless of the weather forecast.

One of the most important elements of Aerocene’s multidisciplinary practice is to listen to the weather and respect it; the symbolic sculptural object, the Aerosolar Balloon around which the community reunites and challenges the possibility to travel without fossil fuels, is set into motion only by the air and solar power.

We can’t pretend to be always sunny, we need to learn from the atmosphere as it is and to follow the natural cycles. First from a terrestrial point of view, the launch pad of all aerosolar endeavours, and then from above the clouds, with them, up in the sky, we may begin to look differently on the planet through the act of re-landing. Aerosolar journies allow for a reattuned perspective. Nature becomes equally addressed, listened to, and respected, but also in terms of the human being; her position on, in and with the Earth, will mutate from there.

Among the human participants a fresh rain and an electric sky joined us as climatic members of the festival, allowing us to focus even more on the consistency of what is in and around us: the air, the new atmospheric and mental state to inhabit. 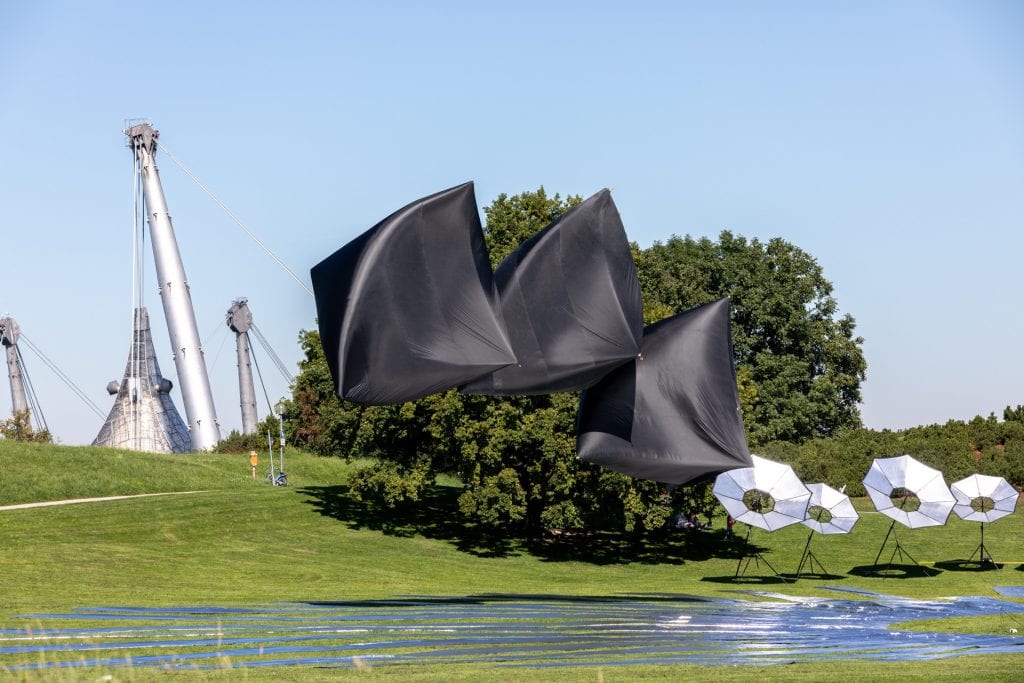 After all the concerns and the debate about Capitalocene, the catastrophic consequences of climate change and the techno-capitalist behaviour that affects the deeper texture of our Western society, the term Aerocene itself brings a breeze of fresh air and gently demands an imaginative effort. It speaks about a future that is not an utopian scenario, but a negotiation of new ways of being together and to exchange, share, and construct an ethical commitment to the atmosphere, and towards each other and all fellow inhabitants of Earth. By floating instead of walking, we would be able to erase national borders, create new rituals, slowly clean the polluted air.

The project, started in 2007 by the artist Tòmas Saraceno with a first solar balloon flight, demands for the invention of new terms, structures, rules. How the life of floating together as human in attunement to the nonhumans be? The presence of lectures from different fields, experts, activists, artists, witnesses of solar flights, members and shy bodies gave an insight of different possibilities of action and reflection. This is the peculiar structure of Aerocene, a net of thinkers alias dreamers ready to act for the futures and in the futures.

My strategy was taking time to think about Aerocene as a state of being.

Every day the schedule of the festival was slightly changed and adapted to follow the claims of the weather and the intensity of the discourses. The main location of the event was changed from the Olympiaberg field, where the launchpad of the Aerosolar Sculptures formed, to the cozy industrial building of Kreativquartier’s Halle6. Due to climate conditions, the number of human flights was reduced, allowing us to imagine how it could have been, and which trajectories we could have drawn in and with the air.

I missed the first day of the festival, but it was dedicated to practical activity, introduction of the multidisciplinary project and dialogs between the community members. When I arrived friday night I joined some members of the Aerocene Foundation in an informal moment, where I got the chance to exchange some words about the results of the day. The experience was transmitted through the air, moved by the telling voices.

On Saturday, the schedule became intense; the voices of everybody and the silence of the few were taken in account during the collective reading of the Aerocene Manifesto, and the newly released installment to the living document: the Aeropolitical Manifesto – Suprapolitics in Aerocene, a speculative handbook written by Avenir Institute (Denis Maksimov & Timo Tuominen). A chance to perceive as the storm, quoting Lydia Davis, was given to us through the romantic lecture about Aerocommons and speculative finance, and then the brilliant workshop, held by Erik Bordeleau.

The artist Beate Engle suggested us the possibility and the mistakes of a museum and artistic strategies in the outer spaces, raising issues about gender and sustainability. Debora Swistun, active member of Aerocene Argentina with her insight in a processuality that is generated from the communities she worked with introduced us to the futurability of social texture recovered by social networks of solidarity. She told us about Villa Inflamable in Buenos Aires and the actions sustained by Aerocene Foundation.

In between, the voice of Tòmas Saraceno, encouraged and directed the dialog, while Camilla Berggren Lundell, Alice Lamperti and Roxanne Mackie told us the impressions of their aerosolar flight experiences.

Emanuele Braga praised for a social cooperation that needs to be understood as techno-fiction and during his workshop “Common Intelligence” exemplified from where we should root our community making. Ayushi Dhawan drew the route of the historical british cruiseship from the times of glory to a remote port in India where its journey would end in producing tons of waste.

In parallel to makes things practical were running workshops from SFB42 (represented at the festival by Johannes Herms and Konrad Altenmüller), FabLab München e.V and David Luigart of EduArt K. and IMAL.

Because Aerocene is also this: make it by your own and find occasions to experiment on what and how is to be an aerosolar pilot; to borrow an Aerocene Backpack and try out how to float, learn from the winds for a solar-powered atmospheric exploration.

On Sunday morning despite the rain at Olympiaberg, a large group of people gathered around the radioamateur Thomas Krahn, one of the persons in charge of thinking systems for the tracking of Aerosolar Sculptures once freed from human hands and terrestrial tethers. Later in the afternoon I left my comfortable position in the audience and became a “guard” for the launchpad in the park, soaked by the rain. Meanwhile the workshops were getting busy and the collective of Aerocene Argentina (Joaquin Ezcurra and Maxi Laina) connected via skype to give an insight of the work undertaken there.

Just right before I left in hurry because the timetable of my flight (this time sadly carbon fuelled) back to Berlin I had the chance to listen for few minutes to KlimaHerbst about the over production of plastic waste, that made me think about the Museo Aero Solar,  a community practice forming through the simple acts of reusing plastic bags and cooperation, both a flying museum and an aerosolar sculpture.

On my way home, many question marks accompanied me, because many topics addressed and many feelings grown inside because of the connectivity of minds and bodies, I recognize that Aerocene is an ongoing process, so I just decided to speak affirmatively about it, as we are already in there. We can fly in the Aereocene era, free from fossil fuels, national borders and extraction from natural and human matter.

Just continue to dream about it, formulate it and behave towards it.