Aerocene project hopes to put research into the hands of citizens

The sky was painted a crystal blue, and from all corners of MIT, people strolled out in shorts and sunglasses. Meanwhile, a gigantic black balloon was floating on Killian Lawn. Animated by what could only be described as an otherworldly force, the object writhed midair. A simple string tethered it to the ground as people looked up in awe at it. EAPS scientists calmly stood before it, chatting away with passerbys. The balloon continued to swim through the air, propelling itself like a jellyfish. 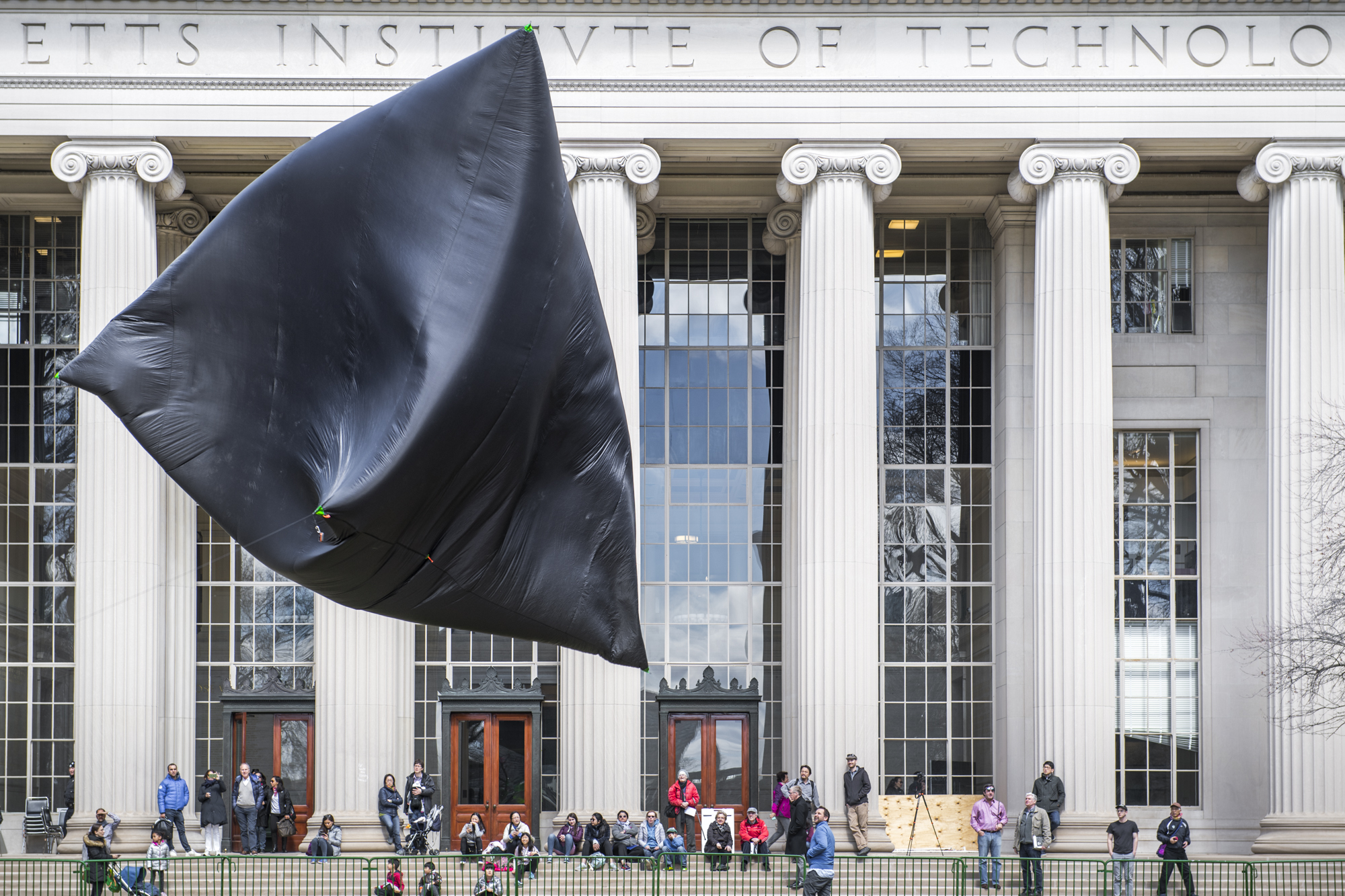 Aerocene sculptures become buoyant by the heat of the Sun and infrared radiation from the surface of Earth. They float following Archimedean buoyancy physics, without burning fossil fuels, without using solar panels and batteries, and without helium, hydrogen and other rare gases. 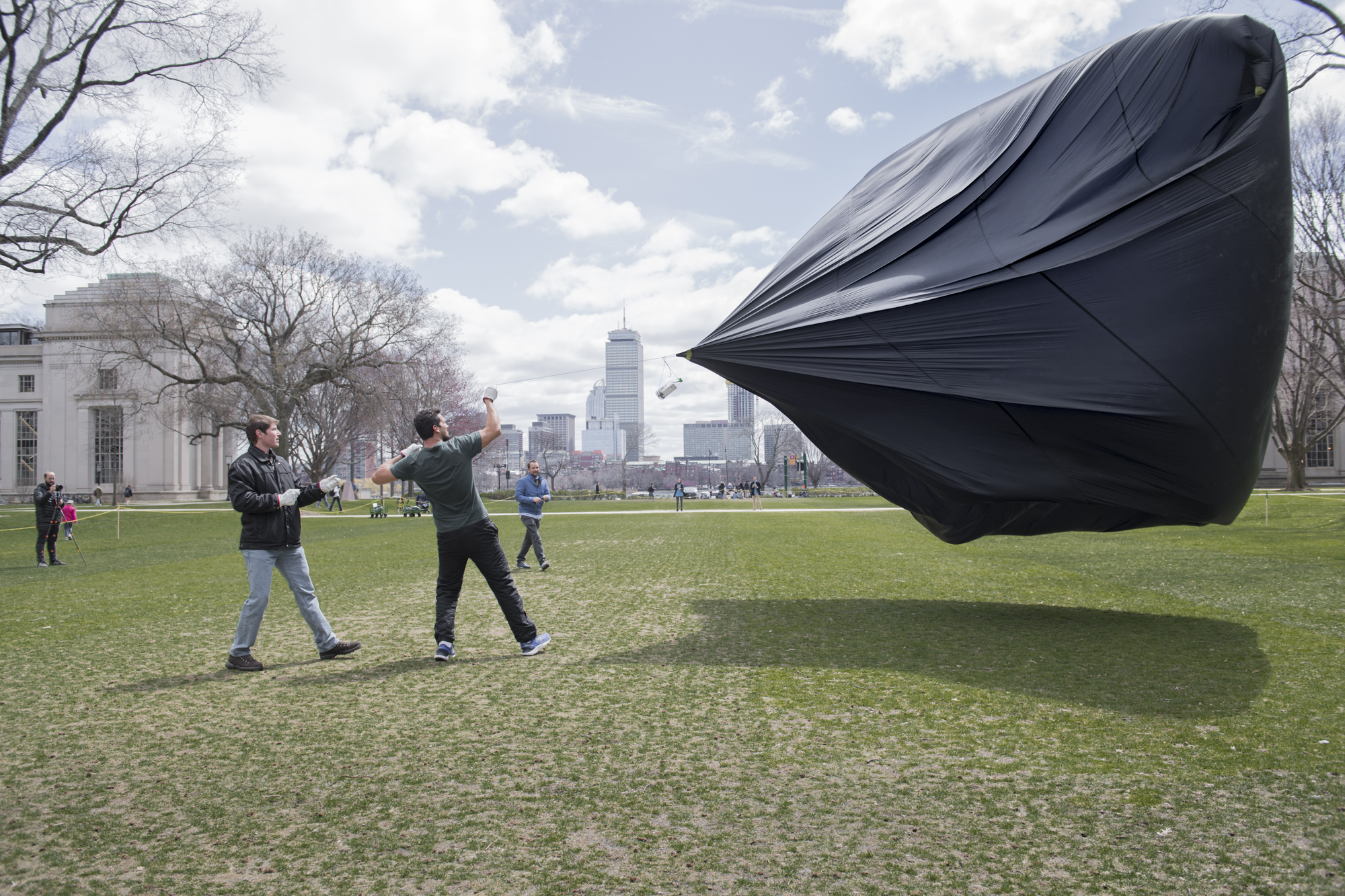 On April 20 and 21, in a collaboration between artist Tomás Saraceno and a few of the EAPS scientists, one of the Aerocene Explorers was brought to our campus. It is a Mylar balloon, crafted with the sole purpose of keeping itself aloft without the use of fossil fuels. Instead, it uses the power of the sun, as explained by researcher Lodovica Illari. The sun warms up the air within the confines of its Mylar and causes it to rise. While up in the air, it continues to twist and turn due to the infrared radiation. 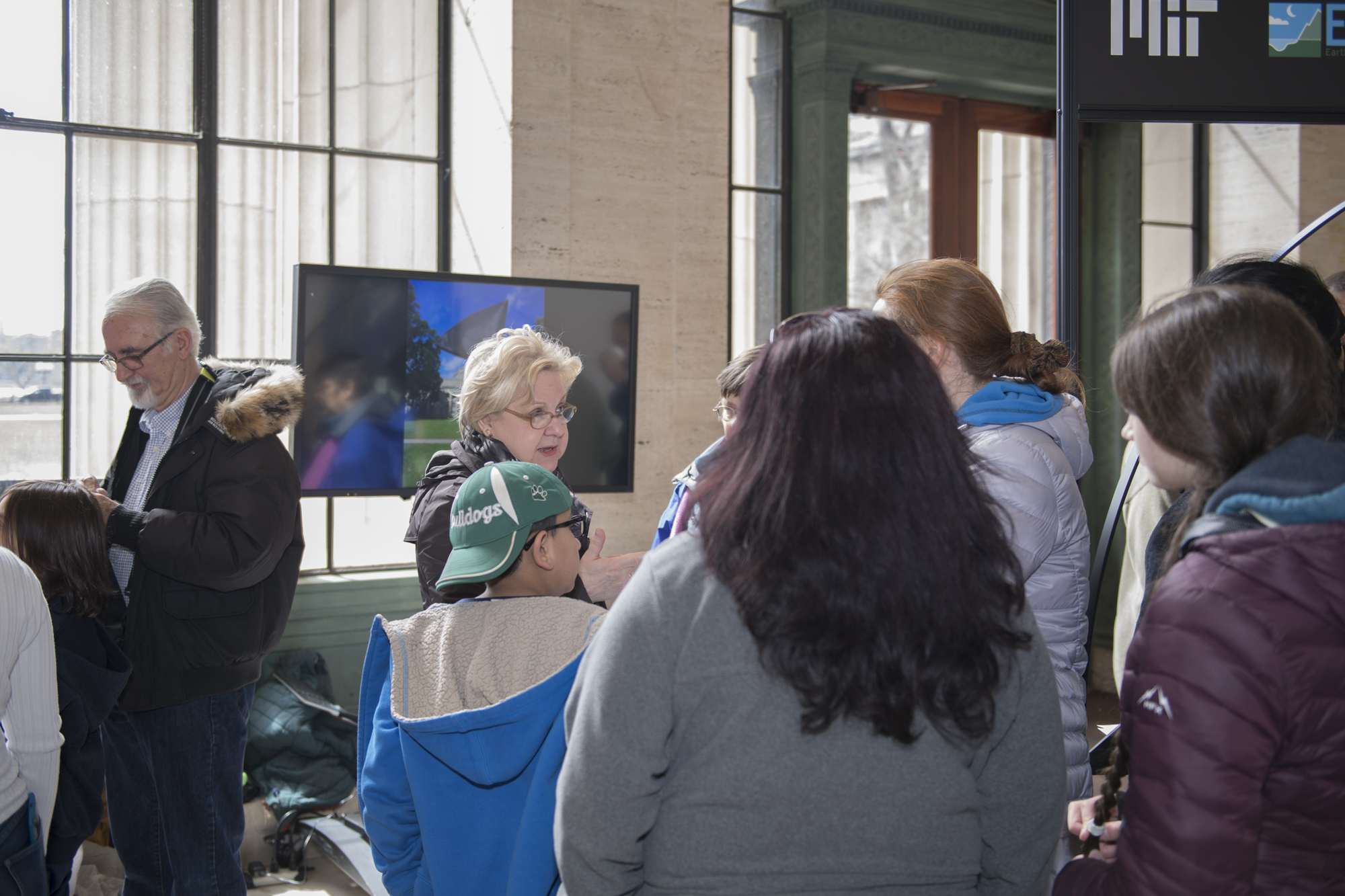 Lodovica Ilari from MIT EAPS explains the inner workins of the atmosphere to a young audience.

In addition, a small detector is attached to one of the corners of the balloon. Its purpose is to record the level of pollutants from the surrounding area. When I talked to Professor Illari about some of the data that it produced, she led me away from the strange artwork to a screen within Lobby 10. Every few minutes, the monitor would show a different graph with information that was being relayed in real time from the detector. She gushed about the prospects of using this detector in combination with this type of airborne vehicle, saying that it “is friendly with the earth” since it “is powered by the sun.”

Despite all of the scientific elements of Aerocene, the initiative itself is still a performance. In fact, a phrase I heard tossed around a lot in conversation with was “citizen science.” Simple in concept but profound in its effect, citizen science has the potential to unite communities all across the world against climate change. “You get everyone gathering data, like crowdsourcing,” added Illari. 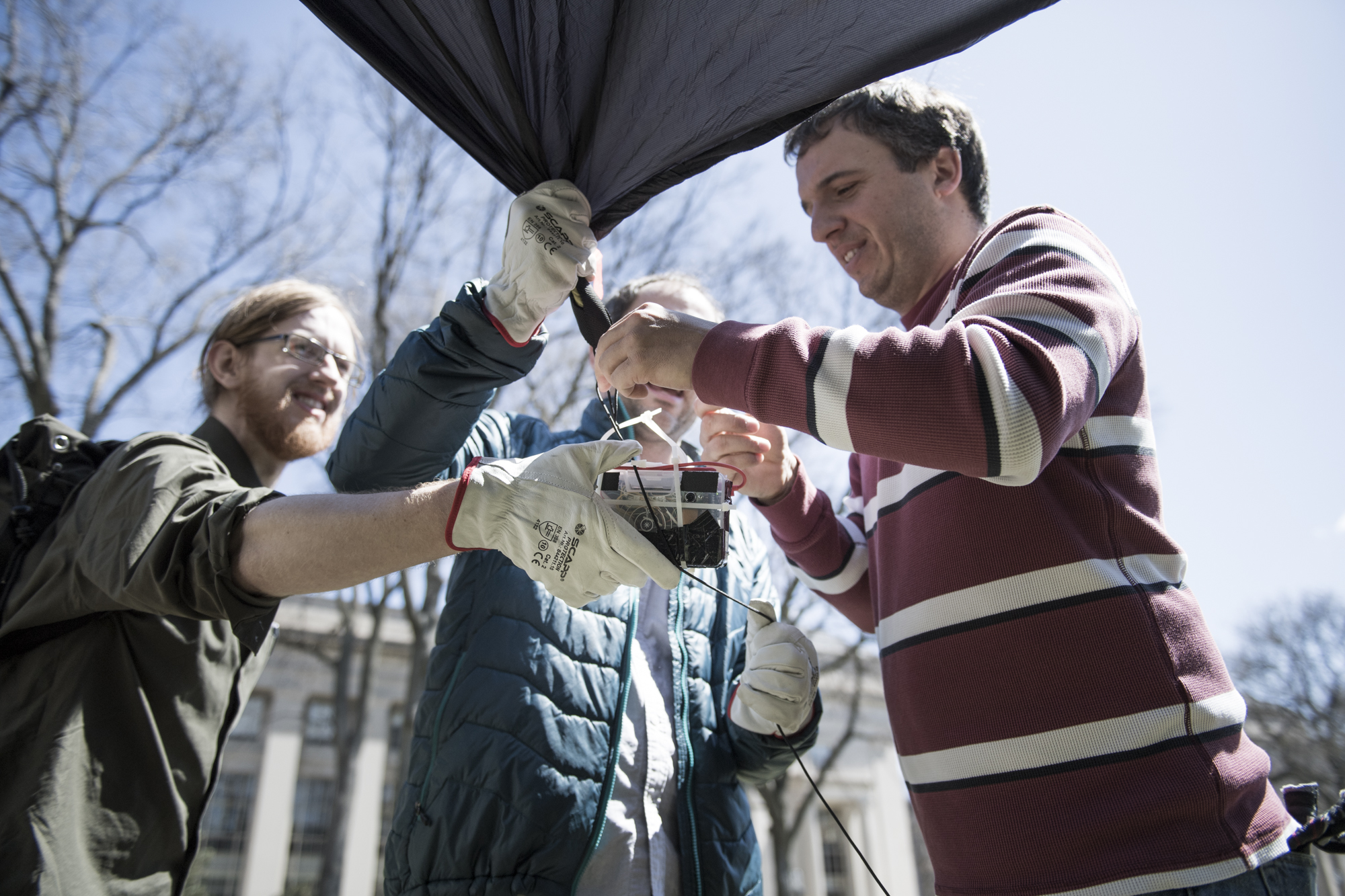 Indeed, this gelatinous creature really did function just like an airborne sculpture. Children stopped running through Lobby 10 to gaze upon the Mylar beast. A few of them asked questions to professors doing demos in the hallway. There were even a couple whose eyes glimmered with excitement as they listened to people such as Illari. “If you can learn in a fun and a playful way, you can raise awareness,” explained Leila Kinney, the Executive Director of Arts Initiative and MIT CAST. 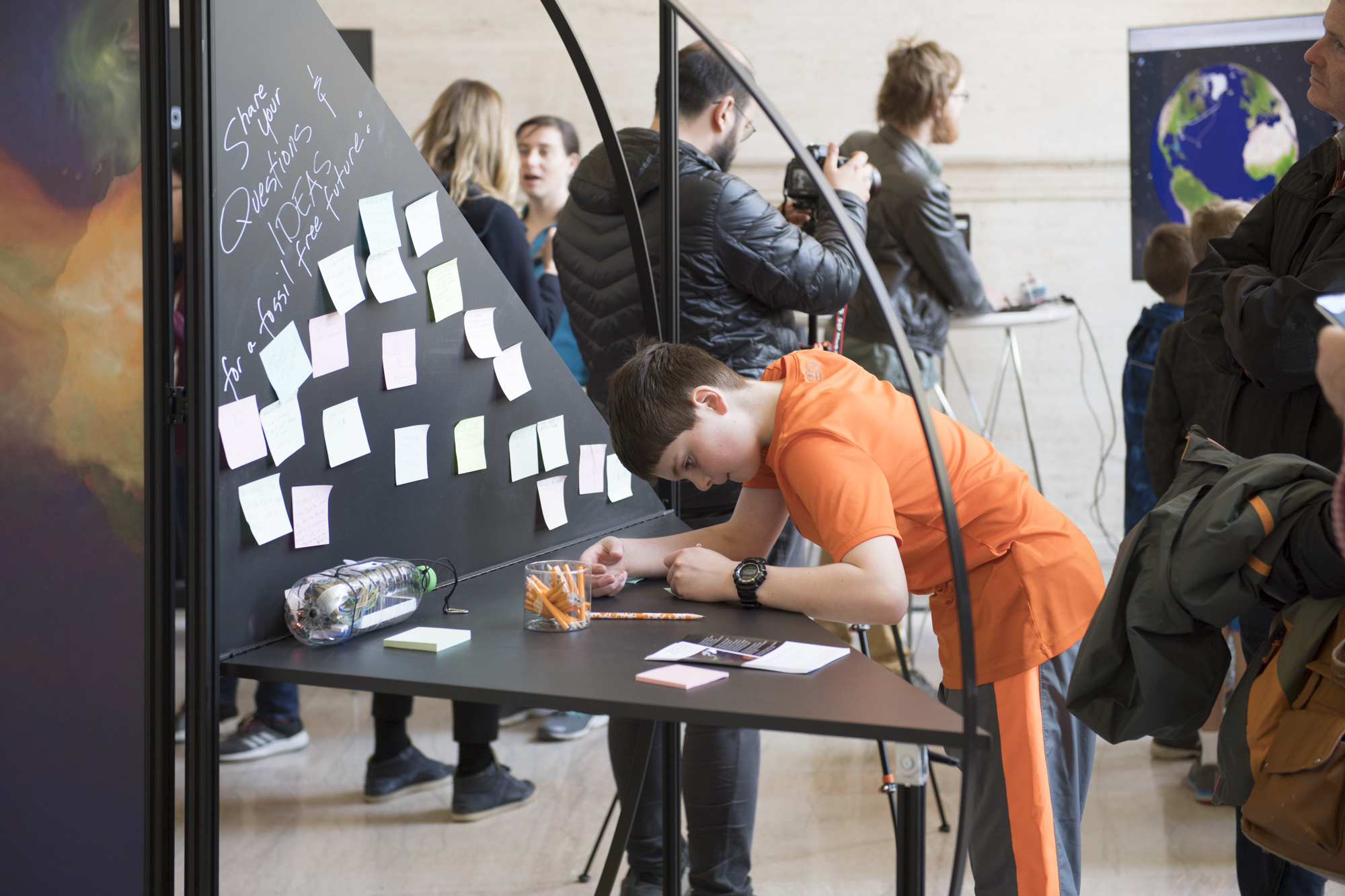 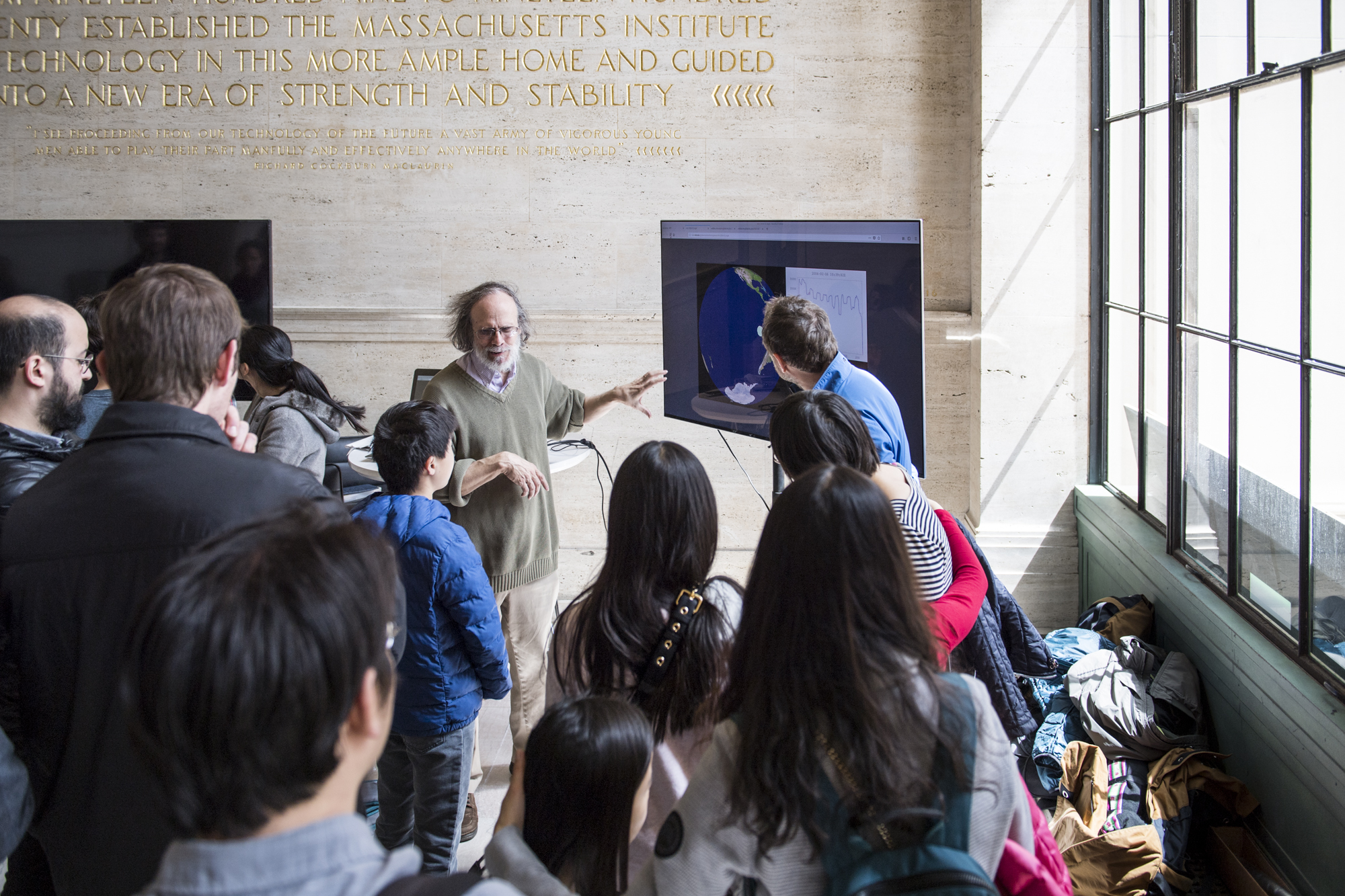 And maybe that’s all it takes for change to start: a few people from the neighborhood simply wondering how they can do something that has a global impact. When asked how this might bring people together to conduct citizen science, Professor Jesse Kroll replied that there really is a “community aspect and a research aspect.” 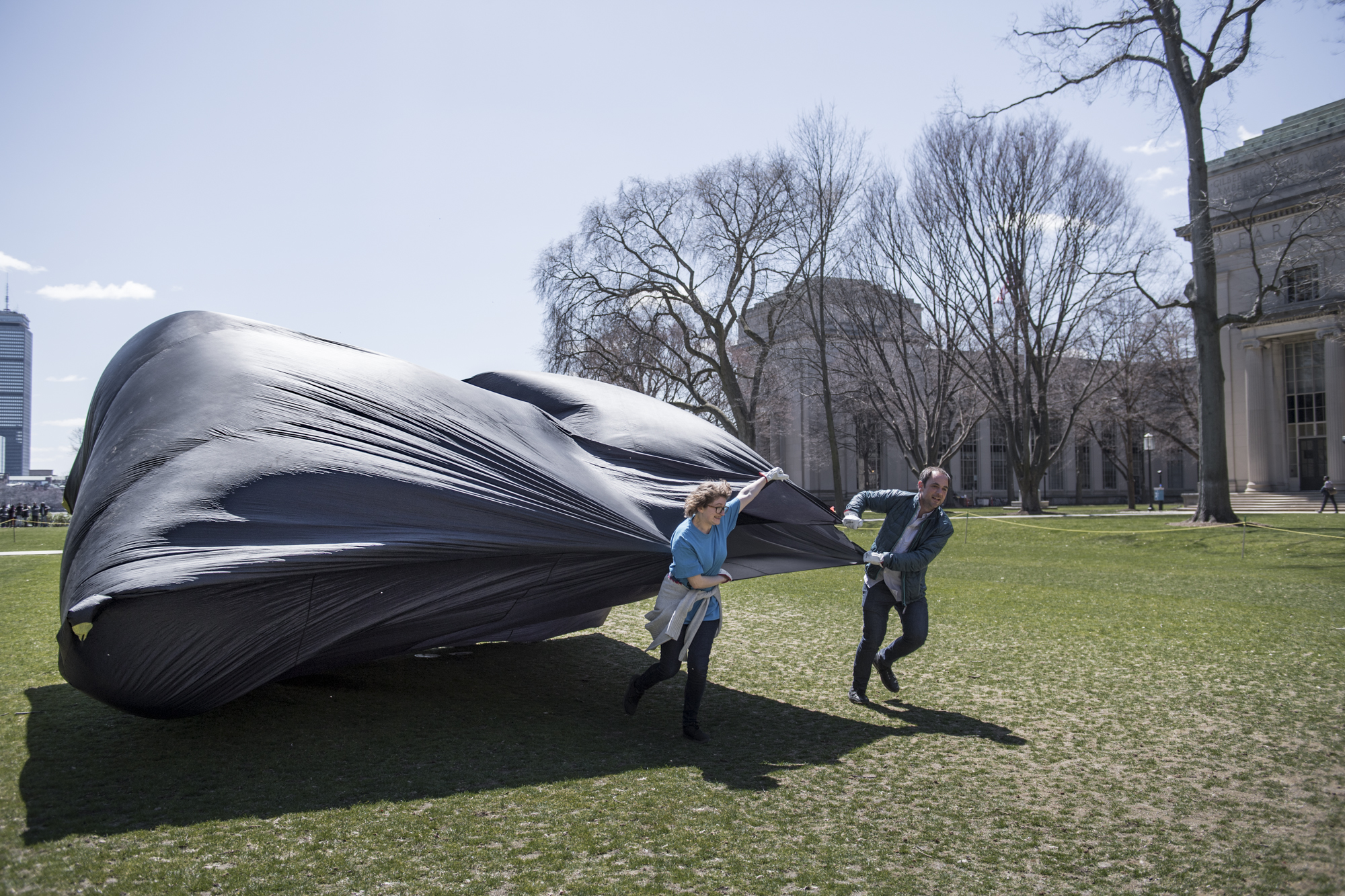 This is how you inflate an Aerocene sculpture: by running and holding it’s opening into the wind! 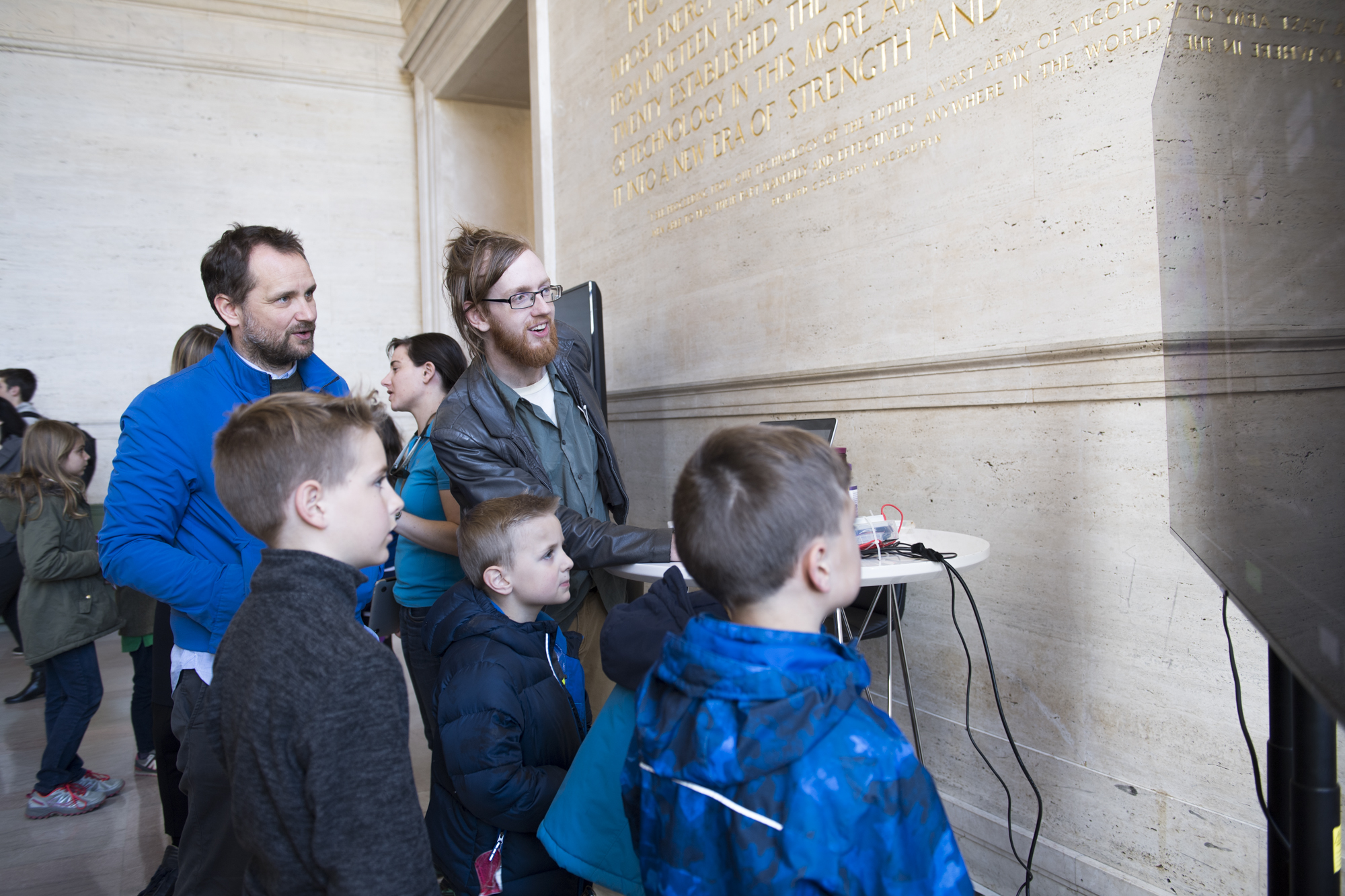 Tomas Saraceno and Bill McKenna showcase the Float Predictor, a tool that allows you to imagine how aerosolar flights could become real An Aerocene sculpture seen from the inside

Overall, this outdoors performance was a wonderful complement to the day’s weather. Not only did it raise awareness about how humans affect our world, but it also brought people together under the guise of being a typical art piece. Nothing could be further from the truth — this pitch-black balloon floated in the very intersection between art and science.

Visit aerocene.org for more information about this project.

With special thanks to all the crew at MIT Arts and MIT EAPS who made this wonderful event possible.

This article originally appeared in The Tech, issue 12 volume 138. It may be freely distributed electronically as long as it includes this notice but cannot be reprinted without the express written permission of The Tech. Write to archive@tech.mit.edu for additional details.

All photos that illustrate this article were taken by Sham Sthankiya.

Images from the Aerocene onboard instrument were captured live by kite and ballooning enthusiast Mr Jay Venti.