The Aerocene Explorer performance, Tata Inti – (father sun) doesn’t try to get closer to the sun. Instead what it does is to play with the way in which the sun and the air interact with each other in thermodynamic balance. 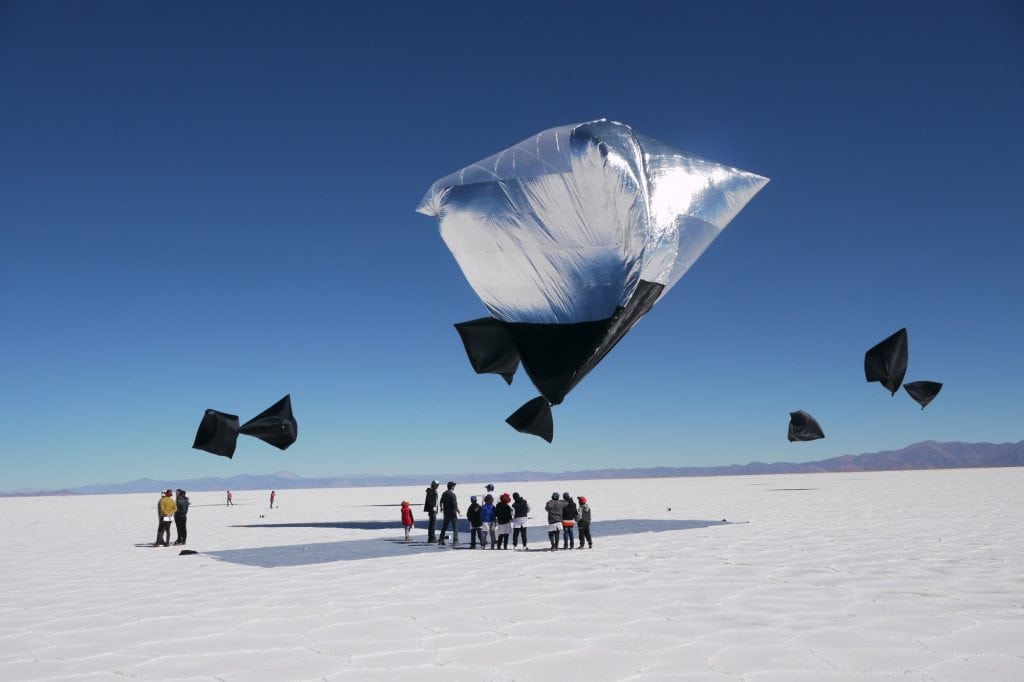 In Greek mythology, Icarus and his father Daedalus, attempted to escape from imprisonment in Crete by means of wings that his father constructed from feathers and wax. Daedalus, warns him first of complacency and then of hubris, asking that he fly neither too low nor too high, so the sea’s dampness would not clog his wings or the sun’s heat melt them. Icarus ignored his father’s instructions and flew too close to the sun; the wax in his wings melted, the feathers fell off and he tumbled out of the sky and into the sea where he drowned.

Icarus is us and the Anthropocene. It is our attempt to emancipate ourselves from nature, to objectify it as an extraneous body, to exceed it, to become its ruler and the ruler of all the beings placed in its kingdom, giving us an excuse to act as if they were not alive as we are, they were not equally legitimated to exist. The dynamic of “othering” through naturalization have been the epistemological justification for exterminations, genocides and exploitation throughout history.

Tata Inti  doesn’t try to get closer to the sun and enter in relation with it through our anthropocentric hubris.

Instead what it does is to play with the way in which the sun and the air interact with each other in thermodynamic balance. When Tanta Inti flies, it traces a narrative thread in the terrestrial  tapestry, that allow us to read the interlacement of the world, the entanglement of different forces that create the condition of life, becoming an interpreter of one of the many languages of the ecosphere.

To overcome the dichotomy between man and nature would lead us to the impossibility of ethically dividing the existing into two categories: subject and object, in which nature is always an object and it is assigned to a “diminished” order of reality, something that is up for grab, existing to serve us.

In this time of crisis, where appropriating is not enough, due to the more and more limited amount of natural resources, we are actually working to replace nature, and, as contemporary Icaro we are punished by our own blindness, the inability to reconsider the organism we are part of, once again thinking of it as an object without agency.

During the Tata Inti performance, the movements of the Aerocene sculptures in the air become aerogliphs; their trajectories are inscriptions that compose a codex, a codex that allow us to interpret the atmosphere, the strata that is created by the interaction of the planet with other cosmic bodies. As any language, it is both written and oral: catching infrasound, it gives a voice to the murmur of the world, recording the vibratory score of worldly events.

In such a way, the Aerocene sculptures embrace the earth, the air and the sun, dance at their dance and with their simplicity become an envelope that contain their entangled movements.

If “the speaking of language is part of an activity, or of a form of life” (Wittgenstein) then the aeroglyph of Aerocene unravel a language that composes poems in the air, and tells us of a new form of life, a post-anthropocenic, one that rediscovers the lure of earthly phenomena and acts following the paths traced by its invisible forces. Its fluctuation echo a re-enchantment that comes from afar, and it’s embodied in the multifarious mythological repertoire that humans built since the beginning: the Andean cosmology of Tata Inti, the Father Sun, also called the Life Giver, or the astronomical calendar inscribed on the Nazcas geoglyphs, or again Helios in ancient greek mythology, that Icarus wasn’t able to reach.

As an aerial stele, it will remain for the posterity as a testimony of a different epoch, the one of the Aerocene, a wish to overcome the bifurcation between man and nature.

With the support of CCK 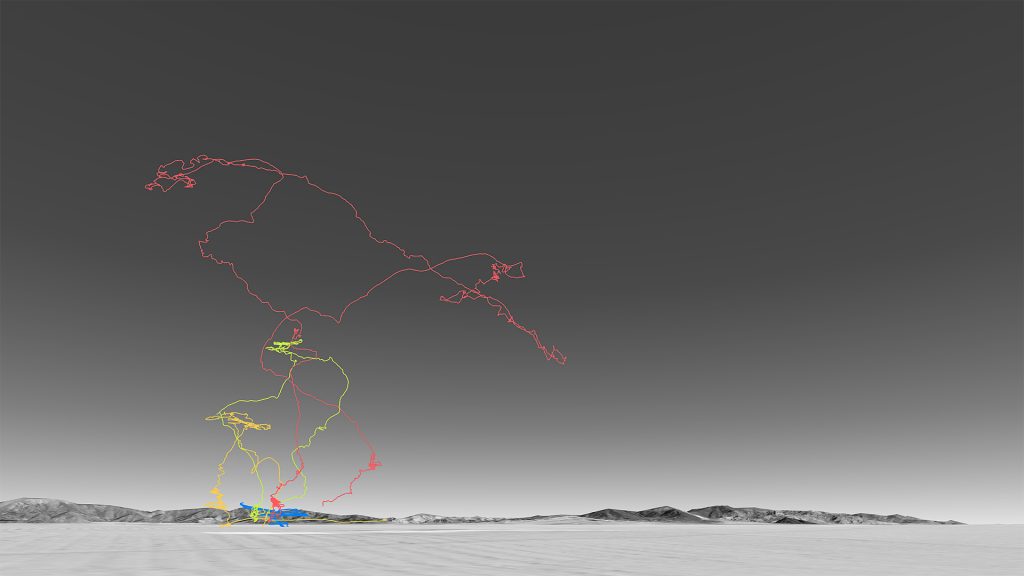 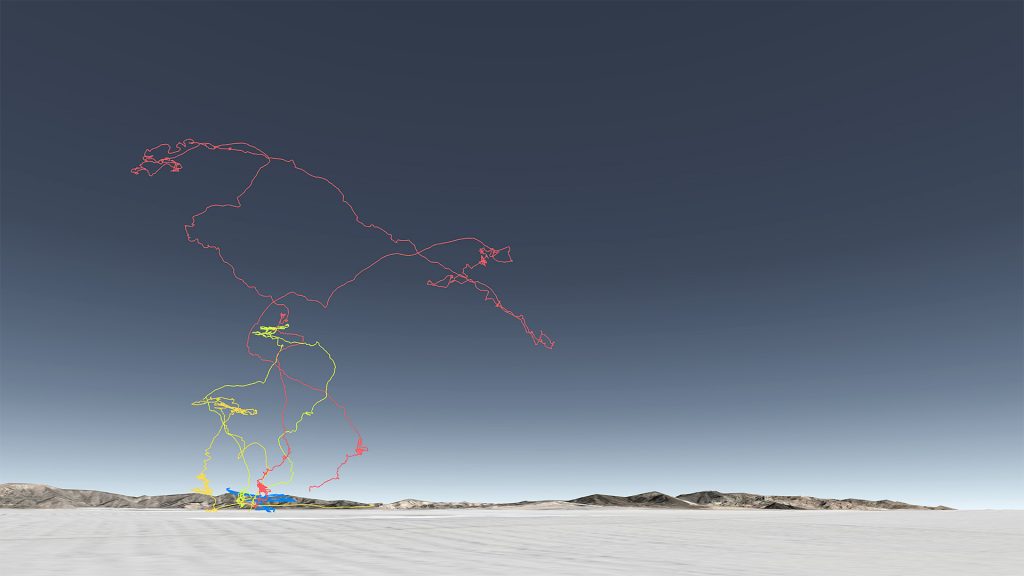 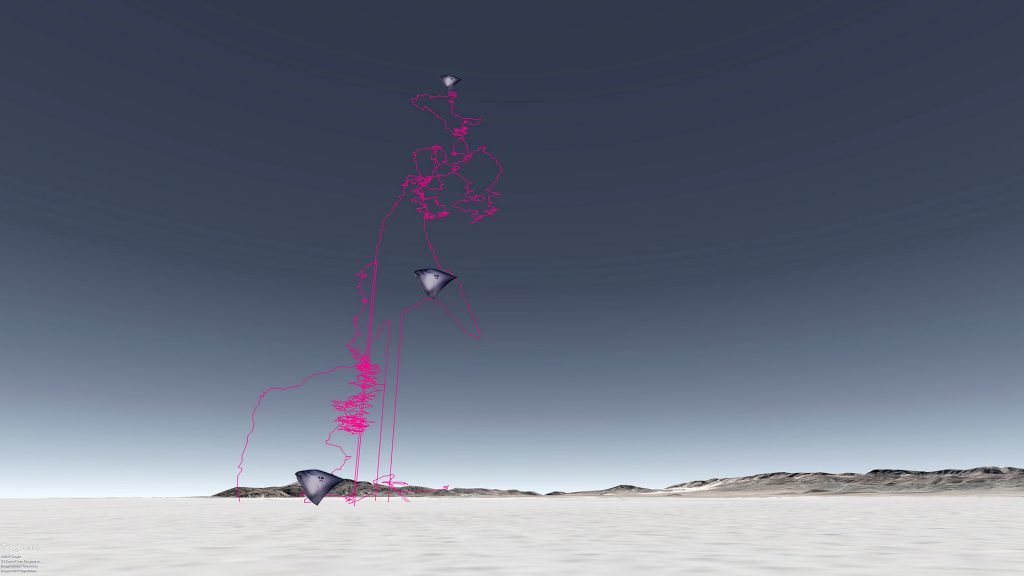 If you would like to experiment with the Aeroglyphs created in Jujuy, you can find them liked below and feel free to download them. You only need Google Earth soft installed on your computer, by double-clicking file, the balloon’s trajectory will open.

This project was possible thanks to the support of