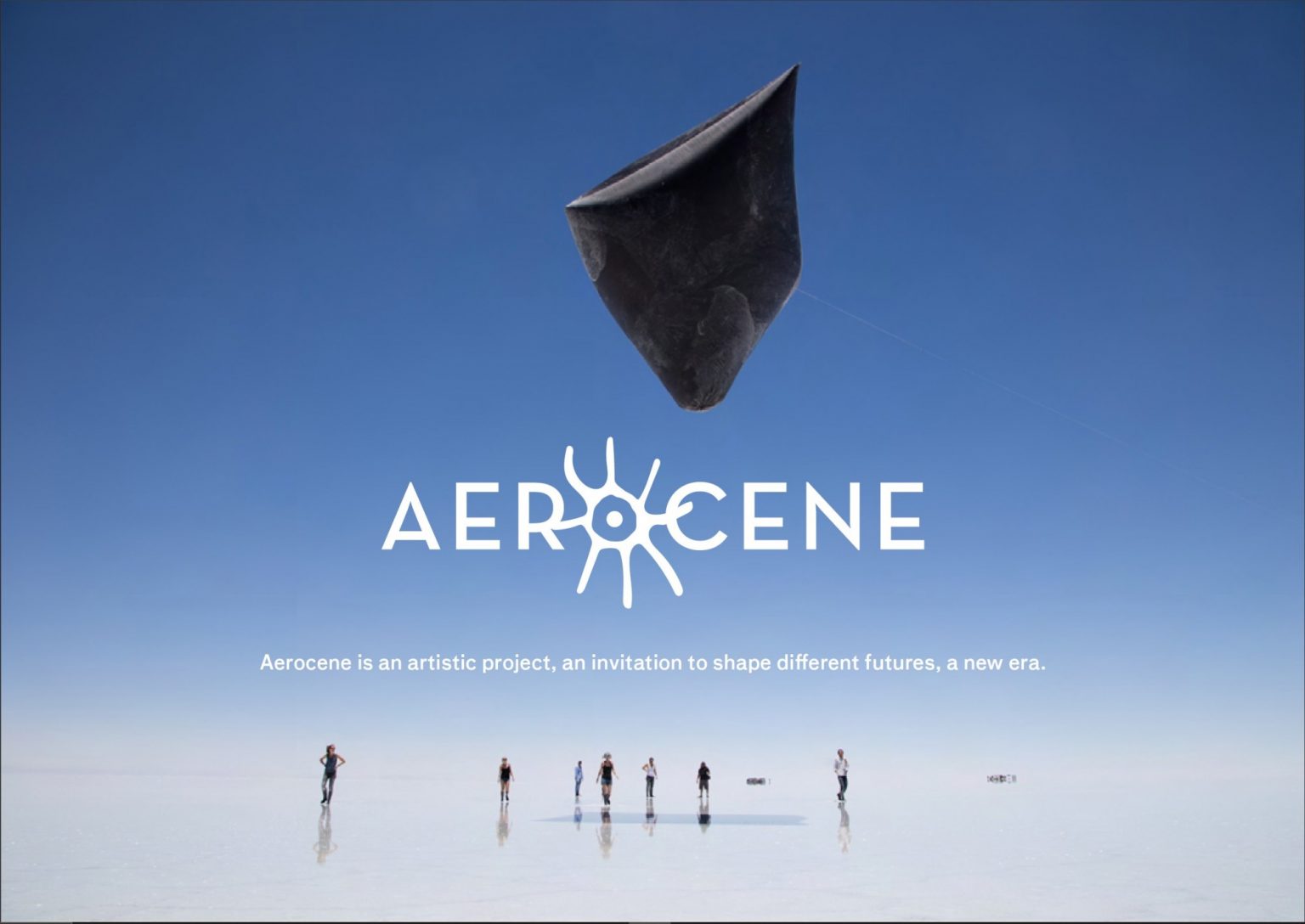 What is the mission of Aerocene ?

The mission of Aerocene reminds us that no matter what walk of life we come from, we all inhabit the same world when it comes to the climate and global emissions, and each of us is responsible and can make a difference. In Saraceno’s words: ‘Aerocene holds a message of simplicity, creativity, and cooperation for a world of tumultuous geopolitical relations, reminding us of our symbiotic relationship with the earth and all its species.’

How does Aerocene Sculptures fly and land without any fossil fuels, solar panels, batteries or helium?

With Aerocene Sculptures, the volume of air inside is heated directly – and only – by the sun. Aerocene Sculptures rise in the air thanks to its ability to contain air, along with its ultra-thin, lightweight, black envelope, allowing maximised heat absorption.

When it comes to manned free flights, for instance Aerocene Pacha flight, rising over the salt lake at Salinas Grandes,  therefore flying over a white surface, the sun is reflected on the ground and creates increased lift capacity. This enables Aerocene Pacha – and other manned flights endeavours – to generate just enough uplift with the heat of the sun and reflection from the earth to take the balloon and its pilot very gently up and down in the atmosphere.

Aerocene Sculptures descend back to earth slowly, once the interior air starts to cool down. In a manned flight, the pilot can control the altitude by pulling a rope that will partially open a valve to release a controlled amount of air and in this way bringing Aerocene Pacha safely to the ground. If the pilot wants to go up further, salt bags can be released. In unmanned free flights, the descension of the sculpture follows the sunsetting and meteorological conditions.

How do Aerocene Sculptures fill up with air?

How long can Aerocene Sculptures fly?

Aerocene Sculptures are able to float for much longer than a balloon fuelled by propane, which due to the weight of the propane can normally only travel for an hour.

Moving only with the radiation of the sun – an unlimited source of lifting potential – Aerocene Sculptures including manned ones, can theoretically float from dawn till dusk, approximately 8-15 hours, depending on the season, location and weather.

No. Aerocene Sculptures create no carbon emissions because it uses only the energy of the sun above us and the air we breathe. By comparison, an average-sized hot air balloon (2,200 m3) will use about 136 litres of liquid propane gas in a one hour flight. This is equivalent to 207 kgCO2e (at 1.522 kgCO2/l) or the equivalent carbon emissions of driving an average car 1,250 km. Source: Julie’s Bicycle, London.

Can Aerocene Sculptures fly at night?

Aerocene Community together with Studio Tomás Saraceno is working on a fully solar round the world journey that is aiming to launch an Aerocene Sculpture able to fly during the day using direct solar radiation and at night using the retained heat from the sun and the heat from the earth to enable the balloon to float without sunlight. The balloon in this case is a semi-transparent silver prototype, inspired by those developed by the CNES in France.

To test a potential day or day-night journey using only solar power, download the new Aerocene App free from the App Store. Developed by Tomás Saraceno in collaboration with MIT, this app uses real-time meteorological data to calculate flight paths using wind currents and solar energy. It predicts the optimum time and route of travel within a two-week window, allowing users to chart hypothetical solar flights from one point to another.

How far fast can Aerocene Sculptures fly in one day?

Aerocene Sculptures move to the rhythms of the planet, meaning the distance and speed is dependent on the level of solar energy, wind speeds and weather. In general, it is possible to fly up to 50-60 miles per hour for 8-15 hours a day. However, Aerocene is not focused on speed or the usual aims of mobility – faster, further, quicker. Rather, the Aerocene Community together with initiator Tomás Saraceno and his collaborators focus on understanding the patience and relationship to the sun we need to re- develop in order to drift and move in a way which ethically collaborates with earth’s abundance of energy.

How do you navigate Aerocene Pacha?

The Aerocene Pacha (like all hot air balloons) is somewhat guided by the operator, who moves up and down following the air currents. By adjusting the balloon’s valve, the pilot can change the altitude to catch different wind currents, moving in the direction of the wind. Unlike birds, hot air balloons (including those fuelled by propane) cannot fly against the wind.

Is flying on board of Aerocene Pacha safe?

The Aerocene Pacha (like all hot air balloons) is somewhat guided by the operator, who moves up and down following the air currents. By adjusting the balloon’s valve, the pilot can change the altitude to catch different wind currents, moving in the direction of the wind. Unlike birds, hot air balloons (including those fuelled by propane) cannot fly against the wind.

During Fly with Aerocene Pacha, the Aerocene Community set 32 new Fédération Aéronautique Internationale national, continental and world records with the piloted flight of the D-OAEC solar balloon. The records have been filed under FAI category A, subclass AT for the General and Female categories, for Altitude, Distance and Duration of the flight.

The Fédération Aéronautique Internationale, FAI – The World Air Sports Federation, was founded in 1905 and is based in Lausanne, Switzerland. It is a non-governmental and non-profit making international organisation with the basic aim of furthering aeronautical and astronautical activities worldwide, ratifying world and continental records and coordinating the organisation of international competitions. It is recognised by the International Olympic Committee (IOC). After a century of steady growth, FAI is now an organisation of more than 100 member countries, forming a strong network linking all those who participate in air sports worldwide. www.fai.org/federation

Why did Fly with Aerocene Pacha take place in Salinas Grandes, the great salt lake of Argentina?

There are several reasons for this location.