Aerocene is on, with and for the air.

Aerocene is an interdisciplinary artistic community that seeks to devise new modes of sensitivity, reactivating a common imaginary towards an ethical collaboration with the environment and the atmosphere, free from carbon emissions.

As an ever growing research and experimental practice, Aerocene is open-source and collaborative. It consists of a dedicated and diverse global community of practitioners who collaborate to promote and enact environmental awareness and atmospheric sensing experiments, imagining new infrastructures of planetary mobility and ethics.

By collaboratively developing, testing and launching aerosolar sculptures, Aerocene seeks to open up the imagination towards an emergent cloudscape, un-tethering a new era of planetary attunement, restoring the thermodynamic balance of the Earth, free from borders, free from fossil fuels.

While fossil fuel enterprises attempt to colonize other planets, the very same interface between us, the Sun and the atmosphere – the air – continues to be compromised.

Carbon emissions fill the air, invisible radio waves develop in a hegemonic algorithm of finance, particulate matter floats inside our lungs.
Can you imagine how would breathing feel in a post fossil fuel economy, and what is our response-ability?

How do we challenge geopolitical borders in an age of climate inequality?

READ AND EXPAND THE MANIFESTO

HOW TO BECOME AEROSOLAR

and float with the air

Of the Sun and the winds.

The capacity to harness the energy of the Sun in ways that make moving with, and relating to, the ocean of air self-sustaining.

An envelope’s ability to gain buoyancy;  a contained body of air heated by direct solar radiation, achieving lower density than the air outside of it to float in equilibrium with the atmosphere.

The desire for futurity expressed in the rejection of fossil fuels and the extractive practices and relations of the industrial-colonial model, embodied in the will to sense and collaborate with the atmosphere and all immersed in its elemental milieu.

An ethical principle of an ecology of practices cultivated by the Aerocene Community, developed through the Archimedes principle established in c. 250 BCE by Archimedes of Syracuse, fundamental to the fluid dynamics of the laws of physics.

DIVE INTO THE AEROCENE LIBRARY

for a common shared knowledge

READ FURTHER INTO THE INSIGHTS OF AEROCENE CONTRIBUTORS 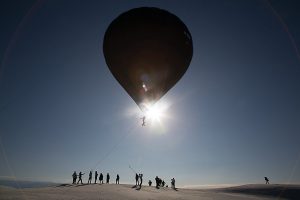 * from a poem written by Percy Bysshe Shelley, ‘The Cloud’ (1820) In 2014, on the occasion of the exhibition “The Anthropocene Monument”, initiated by Bruno Latour and 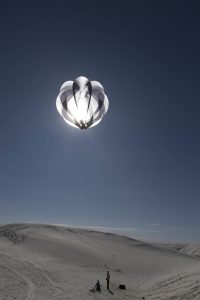 ‘Nothing distinguishes me ontologically from a crystal, a plant, an animal, or the order of the world; we are drifting together toward the noise and the black depths 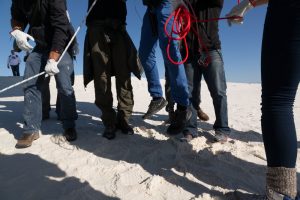 Aerocene: Becoming Aerosolar — A collaboration between Tomás Saraceno and MIT 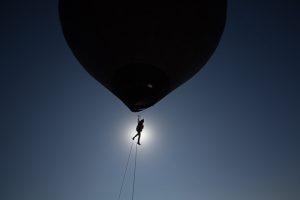 In our late industrial times, two weighty terrestrial infrastructures appear inescapable when becoming unstuck from the earth’s surface. Whether it is gasoline in propeller planes, kerosene in jet 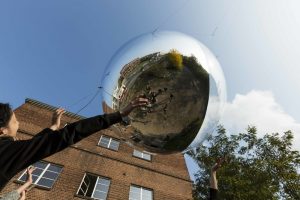 High Altitude, Low Opening (H.A.L.O.)[1] Three–dimensional warfare is said to have begun in China in the first years of the Common Era with the practice of manned flight 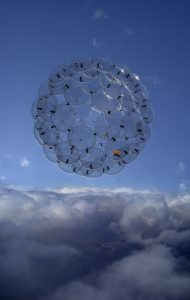 Saraceno’s Model of Models: The Magnificence of Aerocene — Kiel Moe

Tomás Saraceno’s Aerocene is astonishing for many reasons. Foremost is the degree to which his experiment manifests the salient principle of thermodynamics as the motor of its operation:

learn from the past to unravel different futures

Throughout history, humanity has rehearsed with lighter-than-air vehicles aiming for a different way to move through and with the air, only with the power of the sun.

Presented here are various attempts of solar flight, undertaken by people whose types of movements into the atmosphere have become marginalised, and rendered invisible under the hegemony of the fossil fuel regime.

the milestones of a 20 years long dream